According to a new report from the World Meteorological Organization (WMO), levels of greenhouse gases have never been higher. And despite a temporary reduction of emissions during the pandemic, greenhouse gases continue to increase. On the eve of a U.N. climate change conference in Scotland, the report has a clear message. What countries are doing right now to fight climate change isn’t going to be enough.

When 192 countries signed the Paris climate agreement in 2015, the goal was to keep mean global temperatures below 2˚C (3.6˚F) above pre-industrial levels. Ideally, they would limit any increase to 1.5˚C (2.7˚F). With the rising levels of carbon dioxide, methane, and nitrous oxide, those goals are in serious jeopardy.

Chef’s Two-year Journey Across Africa Helped Elevate His Afro-fusion Cuisine To ‘Business Class’
Forget About Fiverr and Upwork. LinkedIn Is Taking Over 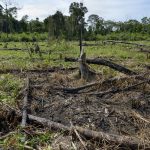