Atos announced on Wednesday that it has named Nourdine Bihmane as Group CEO. The move is part of strengthening Atos’ governance after Rodolphe Belmer’s departure in June.

Nourdine Bihmane will also assume the role of co-CEO in charge of the tech foundations business, operational performance improvement and in particular cash generation.

Atos also announced Diane Galbe would be the senior executive vice president of the group in charge of strategic projects and all support functions of the group. Philippe Oliva, co-CEO in charge of digital, big data and security activities; acceleration and innovation plans for these growth activities; will retain his position as group deputy CEO.

Bihmane started his career in Sales, Operations and Delivery Management in 2001 and rose to multiple leadership roles during his tenures, such as SVP Head of Managed Services, Group COO of Infrastructure and Data Management and SVP Group Head of Strategic Programs.

Nourdine Bihmane brings over 20 years of proven tech expertise, driving change management, growth and P&L performance. Nourdine served in several global management roles across Europe, North America, and emerging markets and drove successful transformation and turnaround programs for the Atos Group. He has extensive commercial and operational knowledge of Atos, especially in the fields of managed services and decarbonization. 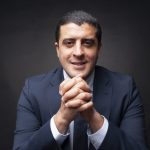