Right from the early 90s, which saw movies like Terminator 2, it was common knowledge that automation is the key to the future, since robots produce much better quality at a lower cost – consistently. But, once Covid struck, technology adoption increased by leaps and bounds, since it reduces human dependence, especially on boring and repetitive tasks.

FloMobility was incorporated in December 2019 with a clear vision: “To dominate the $60 billion non-passenger autonomy market using their non-LIDAR autonomous navigation stack”. They are one of the very few companies globally like Tesla that have stayed away from the expensive LIDARs.

Though the autonomous tech is still in its nascent stage, there are several companies that have been working on building autonomous tech, most of them car-centric. However, nearly all of the existing autonomous technology offerings have one (or usually all) of the following 3 disadvantages:

With the advancement of sensor and compute technologies in the last few years, we foresee exponential growth in the usage of autonomous tech in non-passenger applications. Home cleaning and warehouse robots are already becoming mainstream. Then there are applications like rescue bots for dangerous missions, commercial cleaning bots, lawn mowers, etc that are gaining attention. Another big industry that can see disruptions due to autonomous technology is farming. With low levels of mechanisation across crops and geographies, there is a huge opportunity for agri-bots to help farmers improve the yield by performing tasks quicker and more efficiently.

FloMobility’s offerings are retrofit (can fit directly on the existing vehicles and equipment) across applications – thereby overcoming challenges faced by incumbents to bring a very quick turnaround – starting with sourcing from the OEM, to fitting their stack, installing the software, training the algorithms, all the way to the actual deployment itself.

The response has been phenomenal across all the Form Factors, with the biggest advantage being sustainability – no pollution, no human intervention & automating the mundane tasks. They’ve deployed their bots in agricultural farms, urban societies, resorts, schools etc. with a very unique proposition – Robots-as-a-service. They offer the option of buying the bot upfront, too – but the whole proposition of using the various form factors as a service is something that is unique.

Several entities like hospitals, restaurants, and warehouses are also interested in their offerings & they have set a target of 500 deployments within the next few months, and are well on track to achieve it. There are discussions in progress with large resorts in Dubai, Europe & US to make a global splash and achieve the mission of powering 1 million bots by 2030.

Owing to the uniqueness of the model, disruptive impact and experienced mature founders, Flo mobility has got good backers. They have raised their pre-seed round of $400k in December ’21 from investors like DevX venture fund, Venture Garage & Blume Ventures.

For a deep-tech company to have achieved such success in just 30 months, it’s not surprising that their Founder & CEO, Manesh Jain, himself has over a decade of startup experience! He’s a Gold Medallist from MDI, Gurgaon & had global experience with IBM before he embarked on his startup journey. Before Flo, he founded and successfully exited two startups, the second one, an edtech venture, was sold to Jio-Embibe, a Reliance Jio company.

Their Chief Business Officer, Kaushik Bose, Manesh’s batchmate from MDI, has 14 years of B2B experience across IT behemoths like IBM, SAP, Wipro & GBM (Dubai) before successfully exiting from his 4-year refurbished business last year. He’s also a Franchising & Branding expert with him having his own podcast “BrainBox”.

Though the ecosystem is thriving and disruptive solutions are getting an audience, Deep-tech in India is still in a very nascent stage compared to peers in US & Europe. Indian investors still do not value the company as highly as their counterparts & startups face a lot of uncertainty in the initial days.

“Yes, initially people were skeptical that we could offer such a high level of autonomy at such affordable prices. The proof, however as they say, lies in the pudding & it was great to see the love our bots received.” says Manesh.

“Autonomous tech has been a matter of curiosity and research for a while, but recent technology breakthroughs and increasing adoption of robots across industries, makes this an opportune time to build a universal platform. Flo mobility’s multi application solution aspires to be a go-to solution for any OEM that wants to integrate driverless capabilities in their vehicles and equipment. Unicorn or not, Flo mobility will definitely be able to leave a dent in the universe. And that keeps us going every morning”, he added.

From Revenue To Raising: 3 Startup Founders Share What You Need To Know
Page not found - Marketing In Asia 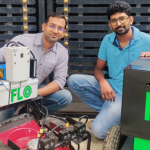