Trump’s new social networking website will be available on Apple’s App Store this week, according to Trump Media & Technology Group CEO, Devin Nunes. He told Fox News’s Maria Bartiromo, on Sunday Morning Futures that the social media platform should be completely functioning by the end of next month.

“We’ll start rolling out people on the Apple App Store this week. That’ll be fantastic since it’ll bring a huge increase in the number of individuals using the platform. Our aim is – and I believe we’ll achieve it – I anticipate that we’ll be completely operating, at least within the United States, by the end of March,” Nunes added.

‘Truth Social,’ will be the alternative social media site created by former President Trump. Trump had promised to build the site while in office, an attempt to compete with social media giants like Twitter and Facebook. His strategy is to take on those Big Tech, which he has long accused of stifling and censoring conservative and right-wing voices and viewpoints. Both Trump and Nunes were suspended from Twitter, shortly after the Capitol riot on January 6, 2021, charging them for spreading false charges of electoral fraud in the 2020 presidential election. The company has stated that its platform will not censor individuals simply because they disagree with their viewpoints. It’s marketed as a platform that upholds the First Amendment.

“Truth will operate as ‘the opposite of some Silicon Valley tech oligarch’ freaks telling people what they want to think and deciding who can or cannot be on the platform. I mean, we’re really taking just the opposite approach, which is valuing our customers,’ Nunes told Fox on Sunday.

According to Reuters, the app will be available on the Apple App Store on Monday, February 21, 2022. 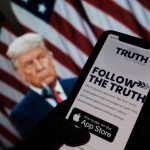