The more than 18 months of various forms of lockdowns in Malaysia threw every one of their trajectories. Plans went haywire, especially for salespeople. Pipelines and funnels were smashed and they can’t simply meet with customers like before. What do they do know? Plan B? C, D, E or whatever?

Or maybe more likely “burn the ships”, or something like that in Spanish.

He was pushing for his men to thoroughly vanquish the Aztec civilization thus grabbing every ounce of gold to bring home to Spain. He had no “plan b”, allegedly. His plan was that there was no escape for his men. They would have to completely defeat the Aztecs, and go back to Spain in the Aztec’s ship – so the legend went.

I’m not so sure if the Aztecs had any open seafaring vessels like the Vikings. Otherwise, they might already have whacked the Spanish, before the Spanish even set sail for the New World. Never mind that.

It was the single-minded drive that caught my imagination, and how I’d lived my life, till just before the pandemic. I used to burn the boat. My boats. I was never keen or had any interest to go back to where I left. And due to my single-mindedness, I hadn’t figured out any Plan B for my life.

In the area of sales and business development, however,  in approaching a client or clients, I always had plans A, B, C, D, E and often tweaked the plans on the fly. Weird, right?

The lockdown however made me think, “why didn’t I allow myself to be opened to other possibilities, in my life or career?” I realized that I got the phrase “set your goal in concrete and your plans in the sand”. I got this really mixed up. I learned that sometimes, goals also could be tweaked – it depends on what kind of goal it is. For example, my goal was to obliterate all my bad debts by the end of the year 2021 and be financially free; at some point, yes, highly possible!

But then, with the multiple lockdowns and uncertainty about the virus, I began to wonder if it could still be achieved. That really required tweaking the plan and mechanism to Plan B. Plan B required me to put aside a lot of what I knew and already practising, then learn and acquire new skills, habits, etc.

Achieving that goal I set for 2021, had a big question mark…

Back to the drawing board for survival (at least)

I observed that companies that weathered the covid storm, bruised and battered, had at some point likely said, “Screw this! Let’s relook at everything. Every single thing!” From their goals, objectives, direction, what they knew, their current practices, etc.

For example, restaurants and cafes that despised GrabFood or FoodPanda had to bite their tongue and realised that they needed these gig-economy people, to survive. Taxi drivers who seriously hated Grab started to look at Grab as their way to survive. Pilots started to sell nasi lemak. Executives started to bake cakes etc. We suddenly saw AirAsia which became “RoadAsia” (or whatever they call it), started doing food delivery and ride-sharing.

The term VUCA – volatility, uncertainty, complexity, ambiguity – was first used in 1987. Economic recessions were almost predictable, in the “old days”. While some said that the economy went into a recession every 3-4 years, some others said 8-10 years. Thus, VUCA! Whose words are we to believe? One way or another, we are screwed! Thus, we have to really look at our goals and plans differently now. The goal now was to survive. The numbers changed.

For me, this was the second time I had been deeply impacted. The first time was in 2014 when the global oil prices crashed to less than US$20/bbl, from a high of US$125! My goals were severely impacted! I had a project in hand that could potentially be invoiced at a total of more than US$100m, and it was shelved! I worked my backside off to get that project to happen for two years. Ever heard the word “stumped”? We had others who were involved, who counted for that project to continue, but it did not. Thanks to (now with hindsight we can say it) severe cost-cutting measures by the client.

Decent life and a new direction

If we look at most people, the main and overarching goals are quite simple:

1. To have at least a good life – a great life would be better!
2. To be financially free – to be wealthy is definitely better!

It’s the breakdown and the mechanisms to achieve these goals that we’d have to look at.

If we take this into selling, the basic goal is to achieve a certain level of sales, revenue, and profitability, for the company to stay afloat, and thrive. When we break it down, we start to look at the numbers, what those numbers mean, and the plan and mechanism to obtain those numbers.

I mentioned the word “stumped” earlier. This stump is as big and tall as anyone. Often, if we face a giant tree just six inches from our nose, we can’t see where we could go or where we need to go. This is where we need to take a few or even many steps back.

Often we have to re-assess if the earlier goal we set earlier still makes sense or is achievable? Can we still move in the direction we set earlier? Do we need to relook at the map and choose a new target? Maybe it would take a little longer to get to where we want to be?

Thus, I believe that goals are dynamic, thus not set in concrete. Goals have to be continuously assessed.

We are often told that to get to the moon, the astronaut had to adjust the trajectory often, by course-correcting the rocket to get to the moon. However, we are seldom told that sometimes the whole mission was aborted, back to the drawing board. Or the mission ended up as a complete disaster that forced NASA to relook at the whole thing in detail.

Don’t be afraid to seriously consider and burn the boats! Yet, at the same time, also consider Plan B, Plan C, or even Plan Z. Do not let yourself be paralyzed by analyzing too much though. I guess Cortés might just be the first guy to famously saying “JUST DO IT” albeit in Spanish and a slightly different way.

In good times, most salespeople have great ideas and ways to achieve numbers. But come the pandemic or any other kind of recession, everyone started to pull their hair out!

Embrace VUCA; go back to the drawing board, assess your situation and just be open to the possibilities that come your way. “Burn the boats” or not, is up for you to decide. But don’t be limited to just one way. 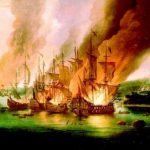