If you can make customers feel good, you can also make them feel good about your brand.

Nostalgia is always an exciting thing to discuss and feel. Memories are triggered by sights, sounds and images. They invoke both anticipation and remembrance. Advertising combines all of these dimensions in a time capsule called nostalgia which creative experts describe as both “comfort food” and “emotional blackmail” to communicate a brand’s directive.

Tapping into strong memories can be one of the most powerful ways to elicit emotion – particularly if you’re targeting a millennial audience. Research tells that nostalgia can be triggered as a way of coping with difficult life transitions and stressful moments. In other words, nostalgia marketing campaigns aren’t just a strategy for selling; they’re a psychological phenomenon.

From iconic fashion brands like Vivienne Westwood to famous fast-food restaurants, there seems to be room for nostalgia in every industry vertical. Brands like Nike and Pepsi are already using retired designs and logos from the past, announcing them as “throwback” options or “retro” products. The sci-fi show “Stranger Things” features references, music, and images that pay homage to some of our favourite thrillers, including E.T., The X-Files, and more, to tap new concepts into old ideas. Generation Z embracing the mid-80s via Stranger Things is fascinating: the last pre-internet days. The final jiff before we all began living in the permanent ‘now’ of digital.

In 2016, everyone’s favourite music streaming service, Spotify, delivered a new spokesperson to the marketplace from Falkor and Atreyu from the hit movie “The NeverEnding Story”. The company behind the advertisement even got the original actors for both characters to reprise their roles. The idea was to combine Spotify’s underlying focus on music, with a nostalgic theme, to inspire and delight their customers.

Also Read: Lure of the Luxe

Nostalgia has both emotional and cognitive elements. Entire generations of audiences can be virtually transported to a seemingly simpler, happier time, such that they identify with the content on display as a group. Take, for instance, Pepsi, the iconic soft drink brand. Like Cola, it also brought back a discontinued drink from the 90s, “Crystal Pepsi”, as part of a limited-time run in 2016. One of the most engaging parts of the campaign was a game called the “Crystal Pepsi Trail”, which drew inspiration from the “Oregon Trail” game of the 70s, updated with a range of 90s call-backs like Tamagotchis and Furbies.

The world has changed a lot since the 90s, so while nostalgic content has to feel comforting, it must also be forward-thinking and inclusive to hit. Apparently, generation Z is going retro which means for marketing that it also has to go as retro as its target group. Thus, it is no wonder that marketing to generation Z is getting increasingly nostalgic.

The biggest luxury fashion brands such as Gucci use nostalgia as an inspiration for their advertisements, primarily by means of fashion video campaigns.The recent “Second Summer of Love: London Acid House” Gucci campaign, characterized by music and visuals from the nineties, shows a group of young adults driving around in a bully and searching for a certain place to hang out. While driving, they use a map as a navigation tool and listen to a tape which was inserted into the cassette compartment already at the start of the video campaign. In the end, the whole group arrives at the spot they were searching for and gathers around in the grass. The nostalgia marketing trend seems to be favored not only by non-luxury brands but also by exclusive brands of the upper price range such as luxury brands.

In 2016, Apple upgraded their advertisements with a new interest in nostalgia marketing for the iPhone 6. The business turned to the Cookie Monster as an attempt to remind their customers that they’re still capable of cutting loose, even if their main focus remains to be on innovating new technology. The branding agency behind the advertisement also released a hilarious series of “bloopers” designed to tap into that heart-warming feeling consumers got when watching their favorite childhood character on-screen.

Nostalgia is usually used when brand love drops. It’s a kind of emotional blackmail that works. We endorse and encourage this behaviour in our daily existence. While advertisers are by default dream merchants who sell aspirations, nostalgia is often used when love is lost. The brands, through nostalgia marketing say, ‘How can you forget me?’, as a jilted reaction. While this strategy has been around for several years now, it’s begun to see a particularly strong resurgence recently, as millennials search for a sanctuary from the stress and confusion of the digital age. As always, successful campaigns – nostalgic or otherwise – will take work and authenticity. The key is listening to what people crave the most, using cherished moments in your customers’ timeline to enhance the identity of your company and keep their finger on the pulse of the existing culture. 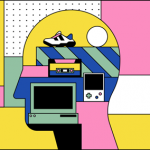