Nearly two in three Hongkongers are unhappy with life in the city, while one in five residents have thought about leaving, a poll by the largest opposition party has found. Some 58 per cent of 534 respondents in a random phone survey conducted by the Democratic Party between December 14 and 24 said they disliked living in Hong Kong, while only 34 per cent said the opposite. The poll also found that 22 per cent of respondents had considered leaving Hong Kong. 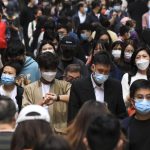