The overall performance of global mobile games in July: 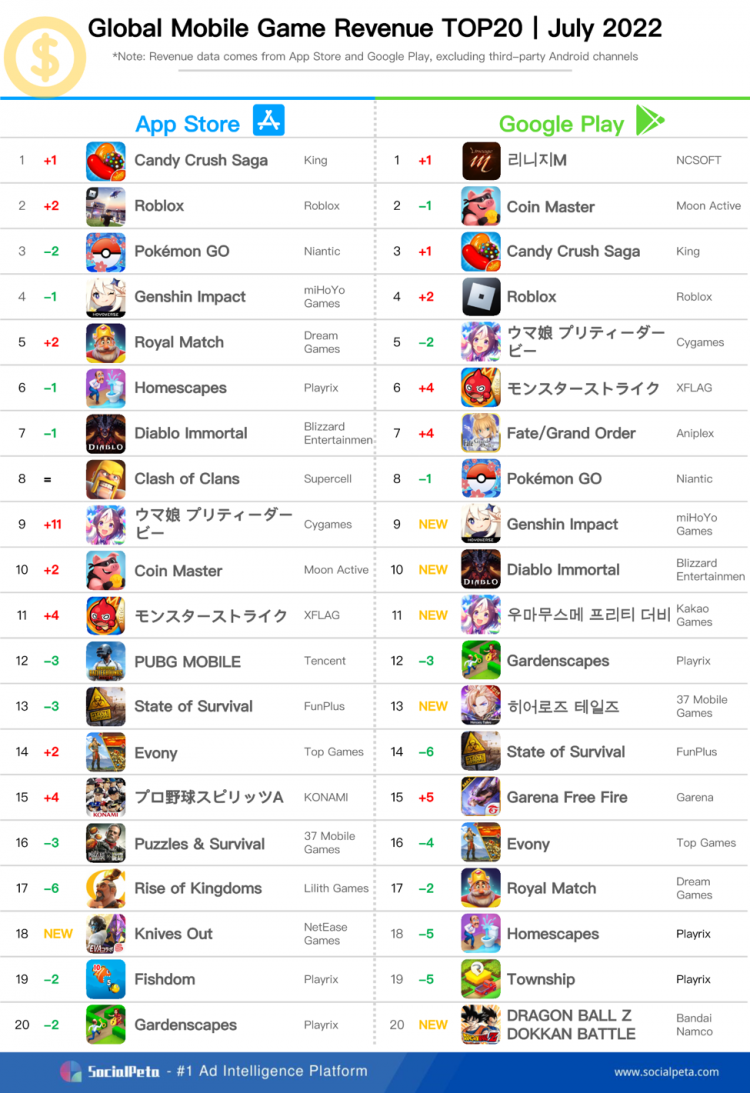 Except for the outstanding revenue of its South Korean version, Uma Musume Pretty Derby’s Japanese version also released many events, including its official release on 20 July through collaborating with [StarHorse 4], a Sega horse racing arcade game, and the release of the preview of its collaboration with [The Idolmaster] a week later. Seen from its collaborations, Uma Musume Pretty Derby generated better revenue through working with game companies that are highly related to the game and highly popular, with a revenue growth of 57.5% month-on-month on the App Store to climb 11 spots up the revenue chart.

[Knives Out] also had frequent collaborations in the summer by working with the world-famous Japanese IPs “One Piece”, “EVA”, and “Sword Art Online” in July. Because of the three collaborations, [Knives Out]’s revenue in July bounced to its usual level from its slumping revenue since January 2022, up 68.1% month-on-month on the App Store.

In addition to the above 2 games, there were many other games with outstanding revenue:

[Dragon Ball Z: Dokkan Battle], a card mobile game developed based on the Dragon Ball anime franchise by Bandai Namco Entertainment, was also ranked among the top 20 on the Google Play revenue chart, thanks to its 7th-anniversary events. [プ口野球スピリッッA], a Japanese baseball sports simulation game published by Konami, offered Qixi Festival gift packs in July, boosting its revenue by 50% month-on-month on the App Store to move 4 spots up the revenue chart. 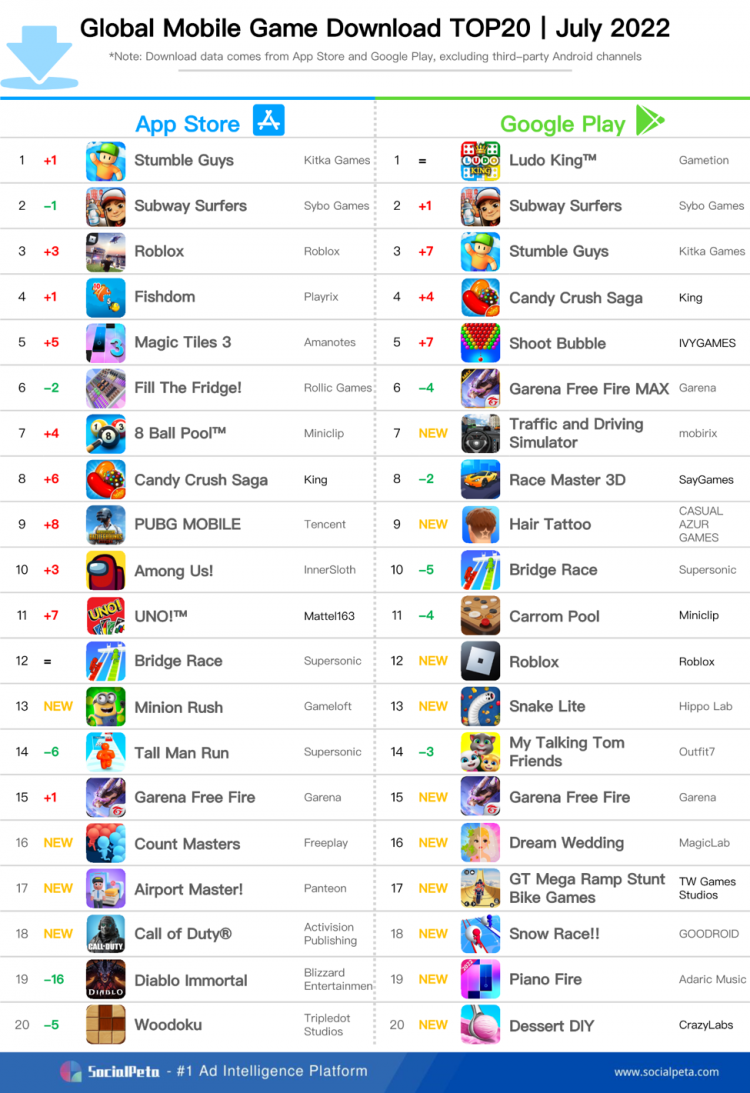 Let’s check the downloads of global mobile games in July. The party knockout game [Stumble Guys] replaced [Subway Surfers] to become the top 1 most downloaded game on the App Store. The game received 8.7 million downloads, up 52.6% month-on-month, with the US accounting for 27.6%, which was the highest percentage.

[Minion Rush], a parkour mobile game based on Minions, was launched by Gameloft in 2013. When the big movie Minions was released on 1 July, this old parkour game came back in popularity again. On the next day after the release of the movie, the game was ranked No.9 on the iOS free game chart with 1.9 million downloads.

[Airport Master!], a game developed by Panteon, was released this April. Thanks to its fancy settings of airport business, simple and interesting 3D stick figures, and very exciting management activities, the game achieved 1.7 million downloads on the App Store, up 419.9% month-on-month.

In this hot summer, a snow ball battle game [Snow Race!!] was released in July by the Japanese company GOODROID, and later was ranked among the top 20 most downloaded games on Google Play. 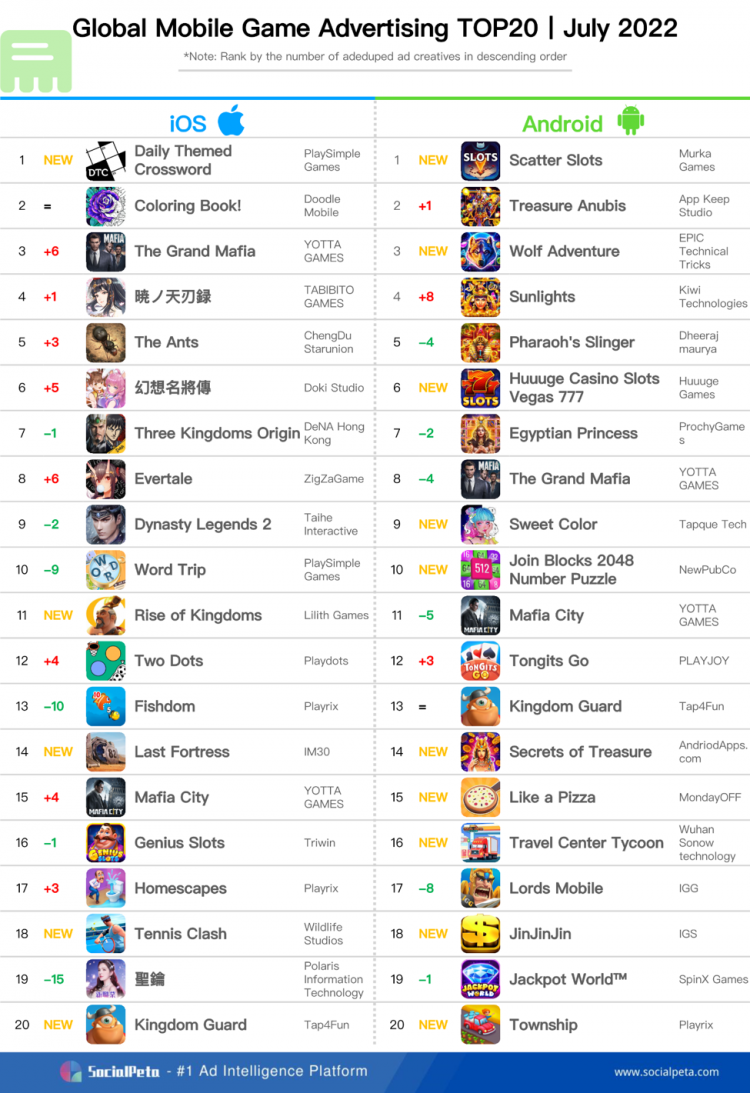 [Scatter Slots], a casino mobile game developed by Murka Games, was among the top games on the Android advertising chart. The game had over 37,600 deduplicated creatives in July. In June, casino mobile games dominated the Android advertising chart, and in July, 3 casino games were new among the top 20 games, including [JinJinJin] which had over 5,600 deduplicated creatives on Google Play and App Store combined in July. [JinJinJin] started releasing its creatives as early as 2 September 2021, and it was most advertised in America, Malaysia, and Singapore.

[Bonus] What has happened to the mobile game industry in H1 2022? To answer this, SocialPeta has published the “Mobile Game Marketing Report for H1 2022”, a report that provides complete and valuable information for your product to easily expand the market. The data in this report will cover 72 countries and regions, as well as more than 90 well-known marketing channels in the world. You can download the full report here. 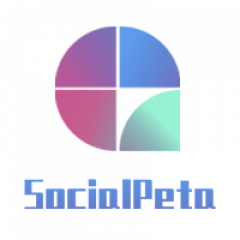