This International Women’s Day, Marketing In Asia has come forward to understand from the Women of Today who have gone through struggles, broken all the shackles, and are now in a leading position, what’s their opinion on gender equality in modern today & some ways to bridge those gaps.

In an exclusive interaction with Marketing In Asia on the occasion of International Women’s Day, Shriti Pandey, Founder, Strawcture Eco shared her journey of becoming an Entrepreneur, some of the social practices that can bridge gender equality issues & much more.

Please share your successful journey of becoming an Entrepreneur and the challenges you faced to be one:

My entrepreneurial journey started in 2018 but the opportunity hit my doorstep when I decided to quit my job in the Big Apple in Sept 2016 to pursue a year-long rural fellowship. The fellowship was an immersive experience where I lived in the interior part of the country in a village where more than 96% of the population was living below the poverty line. The experience helped me to understand the rural challenges and gave the clarity that there is huge potential to address real problems in this country. I witnessed stubble burning during the fellowship which led me to explore the opportunity of Biomaterials in India which is a revolutionary idea of stop seeing stubble as a waste/ challenge but a raw material to decarbonise buildings which is globally the third largest polluter and GHGs emitting industry. The challenge in the start was to convince people to try a new building material when most of us are used to building a certain way for centuries and hardly any innovation has happened in this space . It took us one year to get our first customer but then in the last 2 years we have had more than 75 customer’s in 11 states in India.

Since the Gov. has taken a lot of initiatives for women empowerment, what are some of the social beliefs that need changes in higher education, business opportunities, and high responsibility positions?

Some of the changes that we require in our belief system is to let women pursue more STEM courses which opens up tremendous opportunity for Entrepreneurship, give mentorship opportunity to women and girl students early on in their Bachelor’s to have a sounding board to push them to try new opportunities,and build supportive infrastructure for women so in their 30s they feel supported by the workplace. For Instance in construction providing and making it mandatory for having toilets at sites is essential to drive more women to site engineer. project engineer jobs.

What shall be the education model that can make everyone more accommodating? What should be taught to our children about Gender Equality ?

The education model that should be followed in schools should promote lot of outdoor recreational activities and events which are gender-neutral to build it subconsciously that all gender can aspire for any activity, push role model exercises and ask boys to observe their parents at home when they are young and daughter to observe their father’s to notice the subtle differences and push them to wanting gender-neutral home too besides school environment.

Do the gender gaps are still all too obvious? If yes, what are some of those areas, and why do you think it’s not bridged yet.

Gender gap is more subtle and hence harder to call out these days in our society. For instance, if a role is being considered for promotion and there is a women candidate who just turned mother, it’s rare but not a lot of companies promote and give them more responsibility.

At entry-level MNCs have been able to achieve 40-50% gender ratio but in Mid-senior level leadership, it’s not even 30% female representation where a woman has to juggle both work and home and usually most companies don’t build supporting infrastructure and environment for them to grow.

In male-dominated industries like construction people are so used to just seeing men, when a women is at s site she is usually mistaken for being the architect. I have been often wrongly called out and even now contractors and blue collar workers call me ‘Sir’ as it’s so ingrained in their head.

What could be some of the social practices that can bridge the gender equality issues from grass root level, and what change do you think it can bring to society & the workplaces?

Financial independence and much before that financial literacy is to key to address gender gap at grass root level. Understanding the importance of owning, saving money and being independent empowers in ways like nothing else does. Being financial independent and comfortable talking about money will make later in life women more comfortable to negotiate better compensation, assertively ask for promotions in future at workplaces.

Ancient Indian history was all about empowered women. Even the Gods have an equal share of both genders. What do you think is needed for women of today to recalibrate to new demands and remain empowered?

Women need to believe In themselves and from a very early age parents needs to empower them to believe everything is possible and attainable to grow into empowered women. I am able to be a solo founder of a startup because my parents made no difference in raising me and my brother and that made be believe I can go out in the world and conquer it. To imagine the impossible

#AGenderEqualWorld – What’s your Pledge in one line? 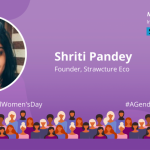